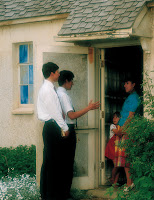 The Mormon missionary experience has always been described as a rite of passage. It is a growing experience for most who serve. I learned that being a junior companion does not always mean submissive support. Our full participation and thoughtful contributions are needed for the success of the work of the Lord.

I shared the following as a comment on Dr. B's missionary website, Prepare ye the way of the Lord, but felt it deserved a place on my own blog as well. It describes a life-changing moment for me that occurred early on my mission. The Lord blesses his missionaries when they try to do things the way he has asked, with full purpose of heart.

A missionary in Honduras

La Colonia Kennedy in Tegucigalpa had been worked over for many, many years before we got there in 1976. It was a world of dirt roads an no cars back then. Yet the field was still white and ready to harvest. My first companion, Elder DJ Webb had lined up a half dozen baptisms the first few weeks I was there.

We taught at least three or four discussions on my very first day and every day thereafter. I think we baptized a dozen or more in the six short weeks we were together. Obviously Elder Webb was a hard worker and trying to do what the Lord wanted. Being a senior companion can be hard, but I didn’t know anything about that.

One day we were tracting and came to a corner, wondering what to do next. Elder Webb looked at me and asked, "What do you think we should do, Elder Malone?" Up until that moment my focus had been on memorizing the discussions and conjugating verbs.

It was all I could do to keep up with Elder Webb, especially since he seemed so fluent in Spanish and I was still struggling with the language so much. I said, "I don’t know. You’re the senior companion. You tell me."

I don’t think I could have hurt him more if I had cut him with a knife. Poor guy! He was exercising so much faith and working so hard to make sure that I had a good start to my mission and I couldn’t see that he could have used a friend at that moment.

Patiently, but with some emotion betrayed in his voice, Elder Webb chastised me for not responding favorably to his request to share the burden of leadership. I was surprised by his lecture and listened closely, apologizing when he was through.

The Lord can teach us

"No problem," he said and shrugged it off. He smiled and we went on our way, down the next row of close-packed houses that I remember so well in the Kennedy. But I continued to think about what he said and just for a moment, as I did, the spirit touched the eyes of my understanding and I saw Elder Webb in a different light.

From then on I did everything I could to be his friend and show him that we were on the same team. He seemed to mellow a bit after that and I noticed an increase in the spirit of our teaching and the tenor of our prayers. He was asking for help in his duty to lead the work in our area.

I later learned to appreciate what a great companion Elder Webb was as I gained experience in the mission and was able to compare him to other companions who didn’t work as hard and to a junior companion who gave me the same treatment once that I gave to him.

I can say without a doubt that Elder Webb was the hardest working companion I had and exactly the kind of first senior comp I needed to get my mission started off right. He taught me to think straight with one simple question, "What do you think we should do, Elder Malone?" I have been forever grateful.

He taught me to think straight and not be just a mindless, yet submissive missionary. I have been able to use this lesson many times over the years as I served in similar situations with bishops who were called because of their faithfulness and humility but could use some straight thinking from their counselors.

"What do you think?" might be the smartest words a bishop can ask of those who are called to assist him. It takes a humble man to solicit and accept counsel. And it is a wise counselor who has done some thinking and can offer sage advice in a spirit of love and encouragement.
Bishopric Counselor Leadership Missionary work

Anonymous said…
This may be my last contribution to your blog for a few weeks *sigh*
Your blog exlpains why O love my bishop so much. He is able to ask his councelor "what do you think we should do?" then really listen to them and then make the decision.
What I really like about him is that he also emphasizes much the importance of teaching each other no matter what position we are in. He is far from being perfect but these are things he has fully understood and apply 100%
August 28, 2008 at 9:47 AM

Bishops are a special breed. Of course they are just mortal men, but they have something special given to them when they are set apart - keys. Not all bishops rise to the calling and fully magnify it so that it is obvious to others that they are acting under the inspiration and direction of the Lord.

As long as we remember that they do possess the keys, we will also remember that the advice they seek from their counselors is a safety mechanism that the Lord has placed in His Church. However, the ultimate responsibility for speaking and acting on behalf of the Lord rests with the Bishop and only the Bishop. That is an awesome and tremendous responsibility that I don't think any Bishop takes lightly.

I have worked with Bishops every week for the past fifteen or twenty years as either a secretary, clerk, counselor or High Counselor. I have never known a Bishop to act arbitrarily although I have heard of some who do. When it seems that they are doing so, perhaps it is because they feel directed by the Lord in that specific instance. But for the most part, every bishop I have ever worked with has been very careful to counsel with his counselors and act in unanimity of decision.

It sounds like you have just such a bishop now. I am so pleased that you have been able to come back into the church through baptism and pray the Lord's blessings upon you as you deal with imperfect men in the church who are trying to understand and heed the direction of the Lord, especially if they preside in the Priesthood, a calling which they did not solicit or actively seek.
September 1, 2008 at 1:58 PM

Alas, though lack of use, I have lost the gift of tongues. I can understand the language most of the time if spoken slowly, but now struggle to express myself in anything other than religious terminology. I could not carry on a conversation in Spanish today but could probably pick it up again after a few days in country.

For example, at one time my work required visits our plants in Mexico to teach others how our systems worked. I could converse in basic Spanish but could not explain the workings of our systems so that they could understand. I needed a translator.

That humbling experience was and is a testimony to me that the gift of tongues is real. I was amazed that after less than six months in Central America I could converse on just about any subject even though I did not know all the vocabulary.

I was able to use words that I had heard once and make myself perfectly understood. I felt fluent and comfortable in this beautiful language. I have sweet memories of conversations with the good people of Central America that were filled with the Spirit of the Lord as I conversed in their language - a gift from God.

When I returned from my mission I was asked to translate for a Stake Conference and failed miserably. The gift was gone. I challenged three semesters of Spanish in College and only got C's. Why? Because although I knew how to speak the language, I could not write it very well.

Again, that was another manifestation to me that the gift of tongues is real. The Lord blesses his missionaries who try to do his will with all their hearts. I believe I was a dedicated missionary and was blessed for it in many ways.
September 1, 2008 at 2:12 PM